Preserved in a pandemic

Preserved in a pandemic

A new generation of preserved flowers is seducing creatives seeking a different look. Marketed by some retailers as an eco-alternative to fresh flowers, it is worth taking a look at the products’ origins, what’s involved in preservation and where they sit with current ideas about flowers and sustainability. 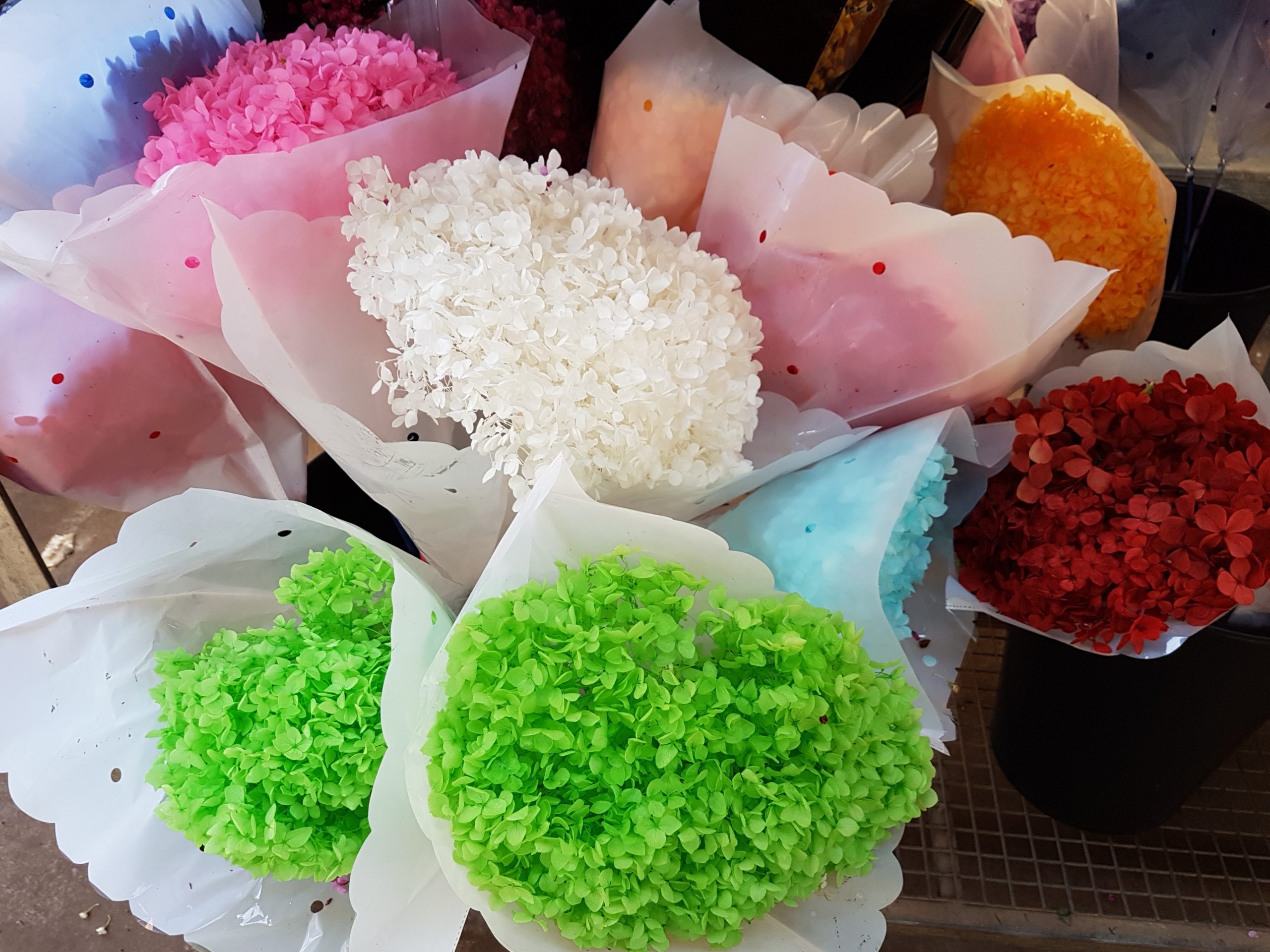 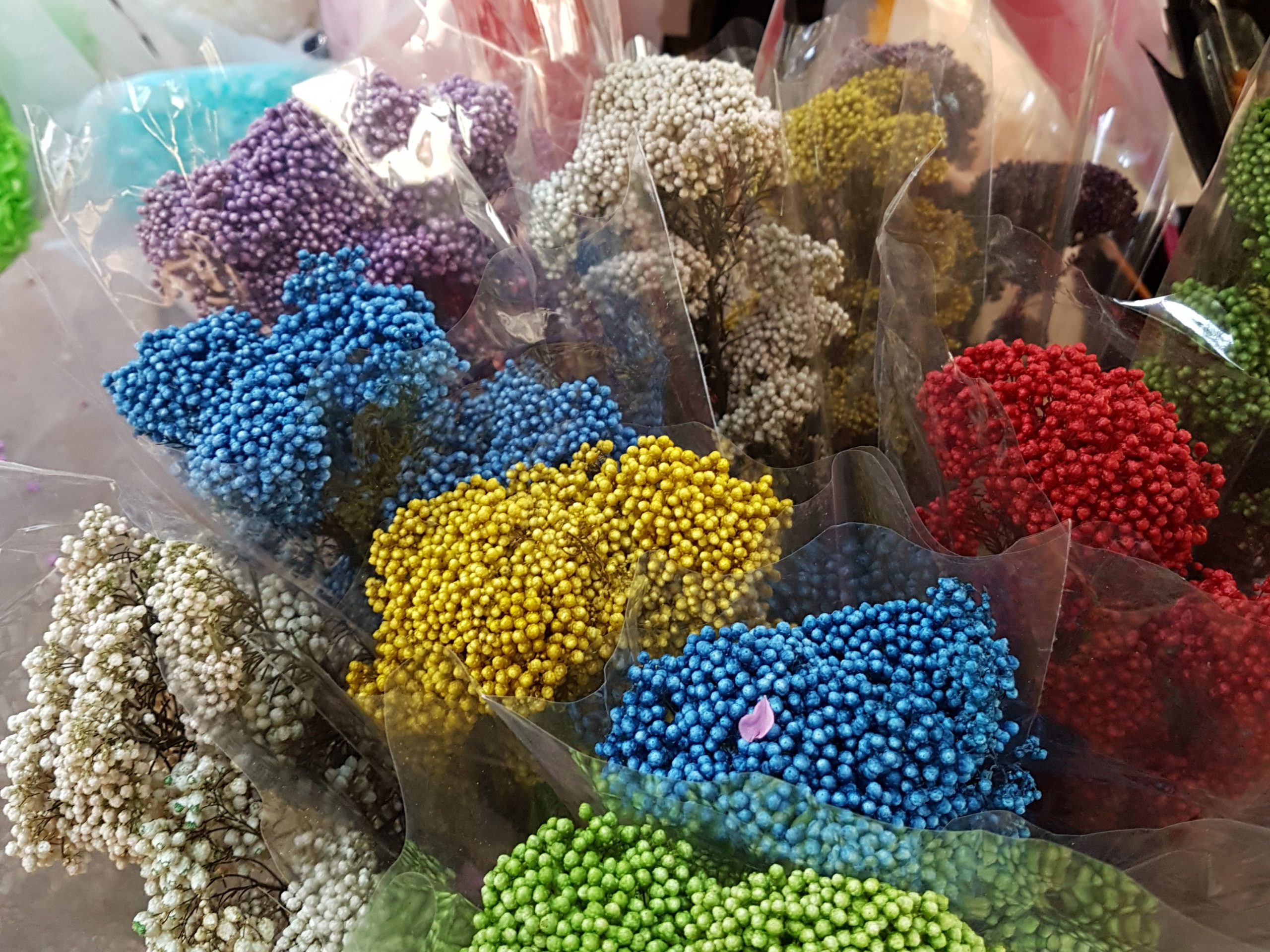 “Preserved flowers are back. You can thank the pandemic,” said the Sydney Morning Herald in July. The article’s messages were bold yet conflicting: tinted with colours “never before seen in nature”, the products “appeal to the ecologically conscious”. Three days earlier, Better Homes and Garden ran a very similar article; a mish-mash of puffy words alongside fluffy pictures, featuring the same interview subject showcased in the SMH; a marketing wiz who rebranded as a ‘Specialist Florist’ in the early days of the pandemic.

Actually, it could be argued that this particular altered flower story kicked off as early as 2014 when US flower-art darling Brittany Asch of Brrch disrupted Instagram’s floral feeds with her arrangements featuring artificially dyed phalaenopsis. Dyeing orchids wasn’t new, but in striking combination with anthuriums and reflexed roses, suddenly cut-flower incongruity found new direction. The arresting designs launched a new trend that kept evolving and signalled to florists and consumers that artificially manipulating flowers was not only NY-cool, but deserved a place in bigger philosophical discussions about beauty and subjectivity. After all, beauty is in the eye of the posy beholder.

At around the same time, Instagram’s photographic filters started to mess with consumers’ perceptions of colour. Event florists all over the world were being provided with ‘inspiration pics’ plucked from the feeds of Influencers, many of them stylists not connected to the flower industry. Homogenised into narrow colour palettes through Insta-doctoring, the look of the flowers was reinforced further by clothing and accessories tailored to the same colour range.

Fast forward to a flower world, 2020, mid-pandemic. No longer do we find five bunches of blue dendrobiums languishing in a box after the market rush. Most big dealers have a dedicated section for dried, preserved and altered. Dried and dyed has evolved into bleached and preserved, flocked and sprayed, gilded and glittered. The traditional process of hanging flowers upside down to dry in a back room, splicing stems for an innocuous uptake of food-dye stained water, or dosing hydrangea with a feed of glycerine has been replaced by industrial strength techniques that have spawned a new industry. 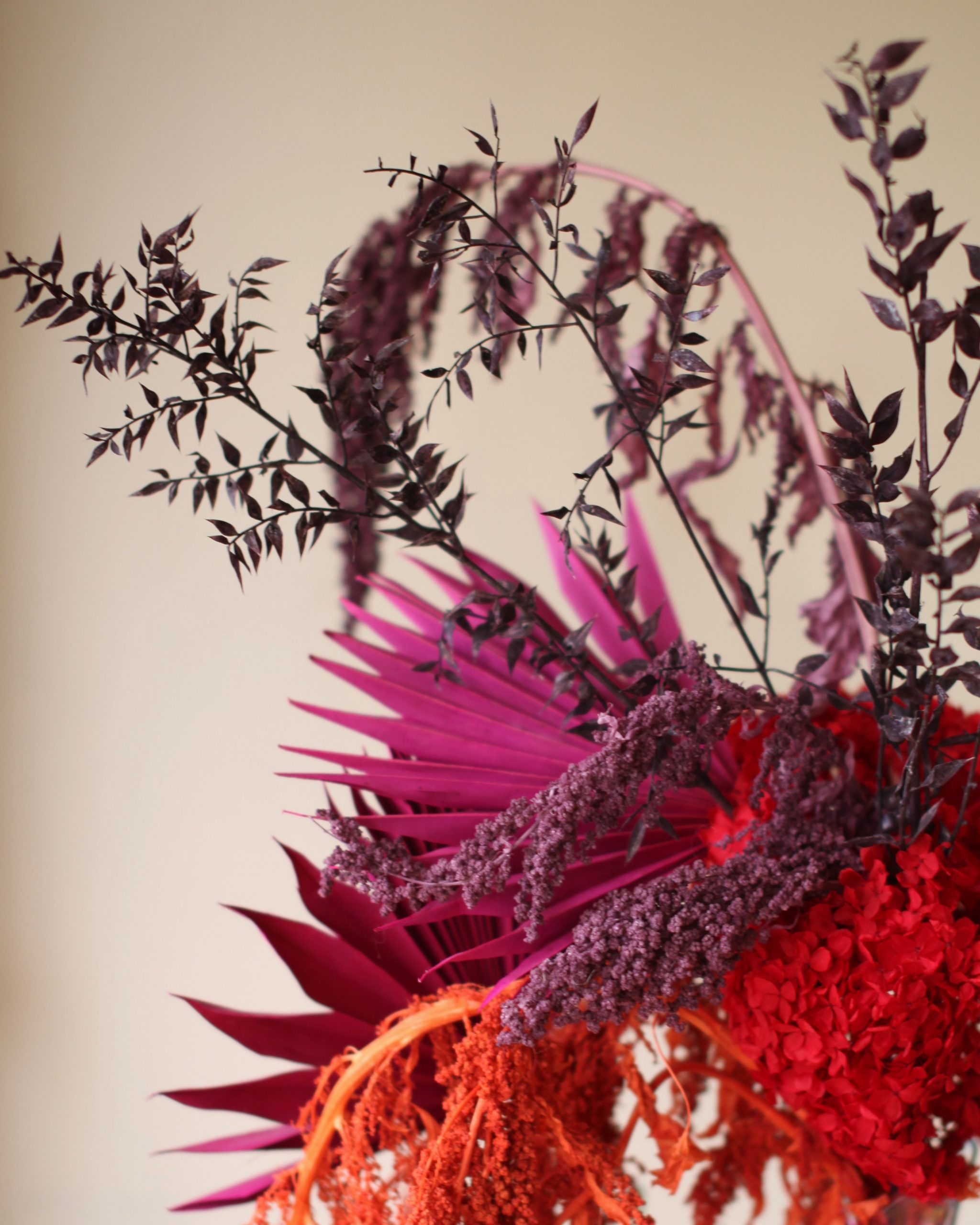 Walking into wholesale dealer Floramax in Monbulk, the customer is greeted with a wall of altered and dried products, the vast majority imported, in place of where sticks, natives and buddy magnolia once reflected winter’s offerings. Owner Tony Casini says the interest in the product intensified late last year, increased at the start of the pandemic and exploded again during the cut-flower shortage in the weeks after Mothers’ Day. The main customers for these products he says are work-from-home type businesses who grabbed anything they could to keep income coming in, although recently more florists have been adding the products to their trolleys.

To create a spearmint gelati-coloured hydrangea or a weeping amaranthus in fire-engine red, the material must first have all the natural pigment bleached from the plant. The harsh bleaching process renders the cellulose in the plant material brittle, so to counteract this, the product must then be reinforced with a preserving solution. This may include humectants to retain moisture, solvents to assist with solution intake, fungicides to prevent mildew, and sometimes fragrance. If the material is being coloured, then a dye is added. In effect, the plant material has had its fluids replaced in a similar fashion to heads of state embalmed for eternal display.

There are standard processing techniques for bleaching, as comprehensively detailed on the West Australian Government’s website, as well as many variations filed in patents for different techniques of flower preservation. However, adhering to processes and safety guidelines to minimise the risk of hazardous chemical exposure to both worker and the environment, depends on who is doing the processing.

It is impossible to identify the origins of all the products because they are being imported from a range of countries and processing facilities. While some products are clearly “Made in China” based on the packaging, a significant proportion are also coming from Japan, India, throughout Southeast Asia and as far as Italy.

A look at the website of Japan’s most highly regarded flower preserving company, Earth Matters, may explain why the Japanese hydrangea can be twice the price of treated material from China. Consistent with the country’s comparatively strong environmental protection laws, Earth Matters appears to be committed to both employee and environmental safety, despite not responding to specific enquiries about the products.

Professor Ian Rae, Honorary Professorial Fellow from the School of Chemistry, University of Melbourne, says that the bleached materials are unlikely to be dangerous. He explains that the greasy feel and strong odour reported by some product handlers suggests that they haven’t been carefully prepared, but with regards to toxicity and handling issues “simply washing hands after experiencing something distinctly unnatural would be all that’s required”.

However, disposal can be problematic. Environmental microbiologist, Distinguished Professor Andrew Ball, RMIT University says that as a rule, “if you are unable to determine the process used for the preservation and bleaching, then I suggest not to compost it”.

“The bleaching process itself uses harmful compounds which may alter the key properties of the plant (nutrients, pH),” he explains. “This probably won’t have much of an effect on the composting process if the amount added is small compared to the other compost material. However, sometimes compounds are added to the flowers after bleaching. In particular, the plastic adhesive polyvinyl alcohol can be used to reduce the brittleness of the flower stems. I would not recommend adding this material to composts. Other compounds such as starch can also be used; this would be OK to add to a compost.”

Anything spray-painted, covered with glitter or flocked with fluff should definitely be sent to landfill after use, the synthetic plastics in all products making them entirely unsuitable for release back into the natural environment, despite their completely compostable cellulose chassis. 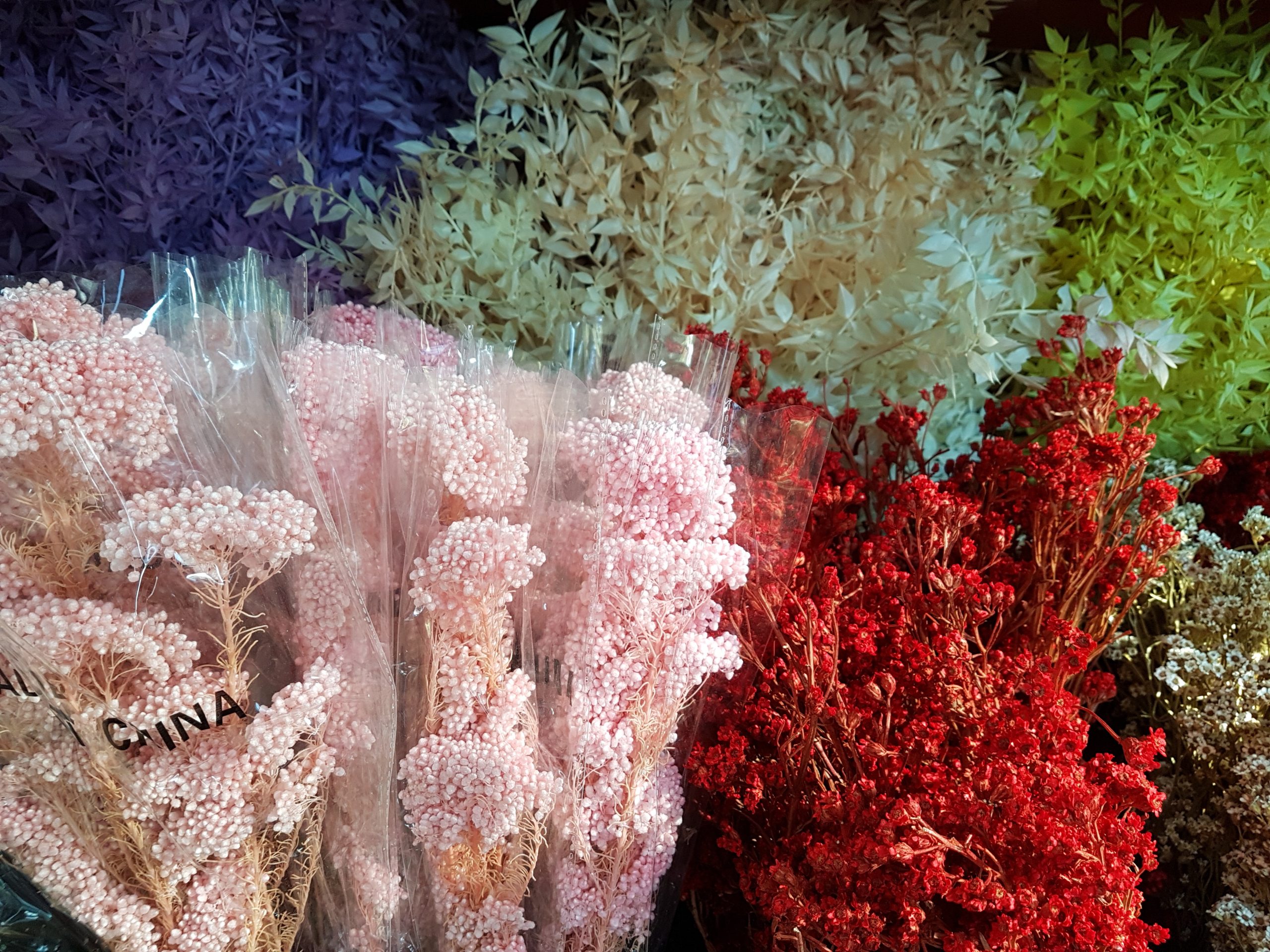 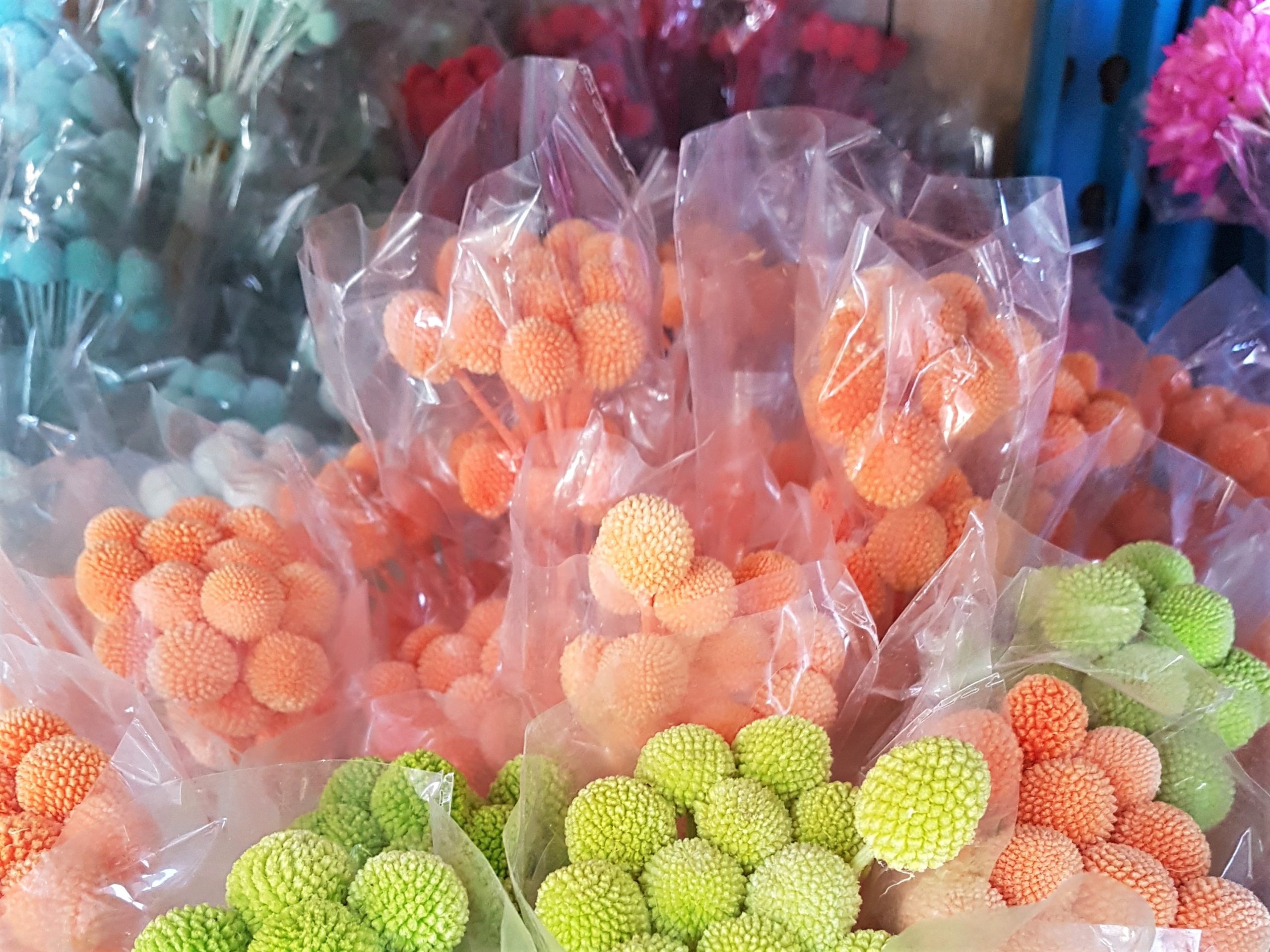 Not only is this range of materials and their treatment processes on offer confusing for florists, the message consumers are receiving about what is natural and what is not, is misleading, especially when arrangements are created with a combination of both fresh and treated products. The mixed bouquet already mis-marketed as ‘seasonal’, because it is in fact spiked with fresh imports, suddenly just got a lot more complicated.

Ame Gaschk Owner of Raven and the Rose in Victoria’s Macedon Ranges believes the trend totally contradicts the reasons florists get into the game in the first place, as she puts it, “for the love of nature”. As the recipient of many wedding inspiration images from clients that have been ‘tinted’ by social media filters, Gaschk has had much experience trying to correct warped customer expectations about what is real and possible, and what is not.

“It can be such a struggle trying to convince clients that using seasonal cut flowers will result in a far better experience than copying images from social media” says Gaschk. “The appearance of this particular trend has made it even harder for people to identify seasons and how flowers change through the year.”

“What people don’t realise when they are looking at images of these materials on social media is the impact using fresh, living, seasonal flowers has when you are surrounded by them. The atmosphere, the scent and the beauty all contribute to the formation of memories. The flowers symbolise the season and looking back, provide beautiful memories about the wedding.”

Becca Caves of Florafolk in Sydney echoes Gaschk’s sentiments. “I fell in love with being a florist because of the joy of working with a product of nature and the changes of flowers and colours through the seasons,” says Caves. “And what we have here is a material that is so far removed from what it once represented,”. “These materials are not in any way connected to the local flower industry and do nothing for local growers.”

It is fair to say that preserved florals are to flower lovers what taxidermy pets are to animal lovers: a grim parody of the living that is missing the essence of what it was. Without the spark of living cells, these products are simply lifeless. During the pandemic they have functioned as a kind of home-decorating Band-Aid, a valiant but fatally flawed attempt to take charge of nature while outside in the world, nature is organising things on its own terms.

More ‘Eco’ than fresh flowers? The answer, as Caves rightly asks, begins with another question, “are these even flowers anymore?”. 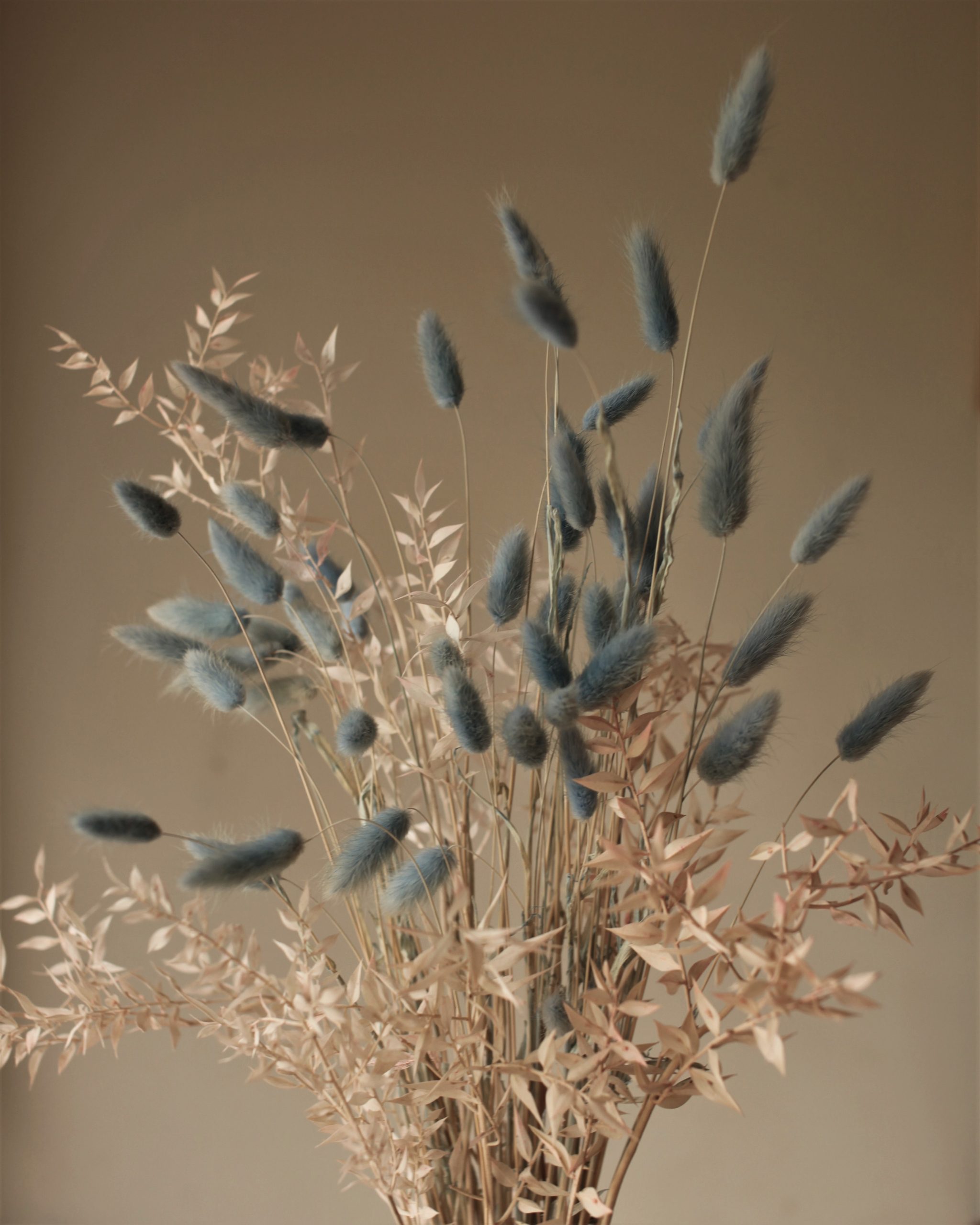